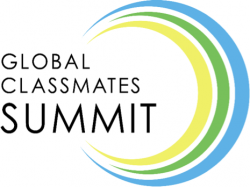 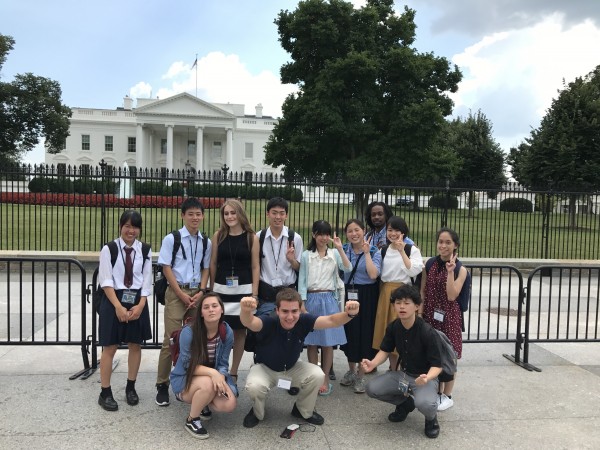 Global Classmates Summit 2017 took place in Washington, DC from July 28th to August 5th with the theme, How can we strengthen future people-to-people ties in US-Japan relations?

Twelve high school students (six from the US and six from Japan) were selected from a pool of nearly 1,350 participants of our virtual exchange program in the previous year.

During the Summit, the students stayed together at a local University dorm and engaged in a wide range of activities such as:

* Prior to arriving in Washington DC, students from Japan gathered in Tokyo to participate in pre departure activities, which included meeting leaders at the US Embassy Tokyo and the Japan-America Society. 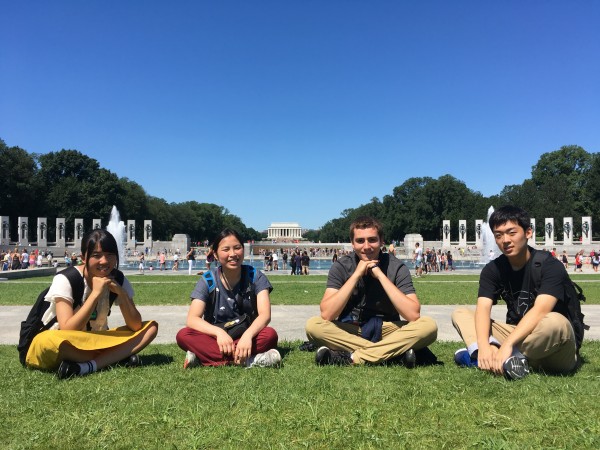 Getting to the Heart of Communication

Participants arrived in Washington, DC with a mixture of excitement to finally meet their peers in person and some fear of needing to communicate in a foreign language. In the beginning, the students were reserved about expressing themselves in the foreign language and were quieter. However, it didn’t take them long to break their mental barriers about speaking up. Fueled by a desire to get to know each other and encouragement from the professionals they met, the students started to push themselves out of their comfort zones to reach out to each other and those they met. They were determined to get the most out of their precious experience. Exchanging thoughts and information became important, not perfect language – they got right to the heart of communication. 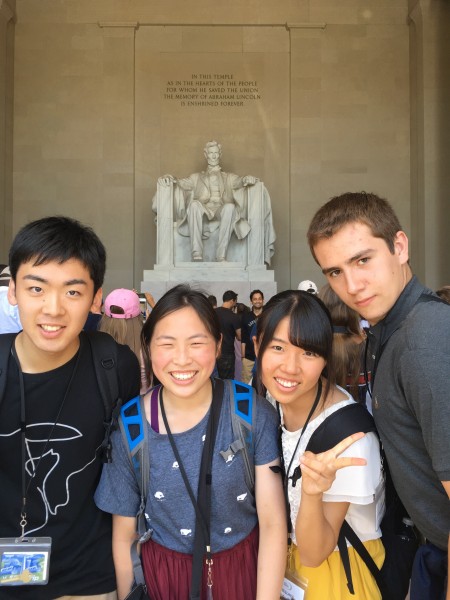 For the visit to the exhibit on Japanese American history, we paired up with our buddies from the opposite country. The exhibit was almost entirely in English so we Americans had to step in and help. I always feared speaking Japanese but I focused and tried to use my Japanese to come up with an understandable explanation so that my buddy could understand this exhibit that features one of the important times of history in US-Japan relations. And surprisingly, I was able to get my point across, something everyone we’ve met on this journey has stressed as more important than perfect grammar. I felt incredibly accomplished and happy to be able to help. Overall, this exhibit was only one of many parts of this program from which we all learned and bridged our two cultures: American and Japanese. – Cheryl

I came to realize the importance of courage. The courage to take my first step toward improving my English. In order to brush up my English as a communication tool, I need to use it. I need to speak up and initiate conversations. While it is obviously important, we Japanese are not used to it and yet it has turned out to be the most important way to improve my communication skills. – Kana

By getting to know each other as individuals and working alongside one another throughout the Summit, the students developed a great level of cross-cultural awareness.

Not only recognizing their major differences but understanding where they came from helped the students empathize with each other at a deeper level. It also led them to respect and accept differences. Some students commented that they learned how they can still get along with those with different behaviors and opinions, and they no longer get offended easily by them.

Additionally, they realized that general images of a culture are not always true, or at least do not apply to everyone in that culture. They also agreed that they are more similar than different and share many things in common, including street fashion, love for pets, sense of humor, societal issues, aspirations, and dreams.

Up until I heard perspectives from those on the career panel who were educated in Japan, I didn’t truly understand why Japanese students tended to seem shy and had a harder time speaking up during discussions, other than the fact that there was an obvious language barrier. They helped me understand that in Japan being different is not as welcomed as it is in the U.S., and asking questions is not so encouraged. It really helped me gain not only a new perspective, but it also helped me to empathize with them on a new level. – Bianca 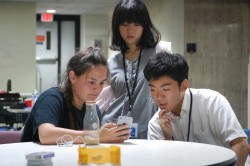 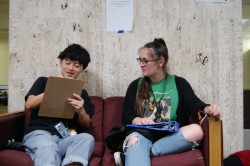 After meeting various leaders engaged in US-Japan relations, the students came to realize that the US-Japan relationship has been a much bigger part of their lives and impacted both countries to a far greater extent than they initially imagined. They learned how the two nations share common values such as a belief in democracy and human rights, are important security partners, and have mutual large-scale business investments that impact their communities.

They were especially touched by the stories Ambassador Zumwalt told of the immediate cooperation between Japanese and American governments following the Great East Japan Earthquake and Tsunami. At the time of the disaster, Ambassador Zumwalt was the Deputy Chief of Mission at the US Embassy in Tokyo. He recounted how despite the intense 24/7 work that needed to be done, everyone at the US Embassy Tokyo and State Department willingly dedicated themselves to making sure they did all they could. It was a great reminder for the students on the strong friendship the two nations had forged and what the friendship meant at such a tragic time.

Many leaders who spoke with the students attributed their dedication to US-Japan relations to their time spent in the other country and their friendships with people there. It shed light on the fact that people-to-people ties are the foundation to all collaboration between the two nations.

I have come to realize that the betterment of relationships between not only Japan and the United States but all other countries starts with people-to-people ties. People are the pillars for building relationship. Deepening ties between a few people will form into ties between governments and more people. – Percy 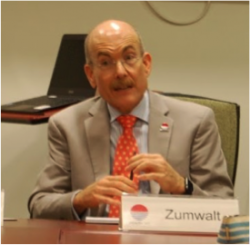 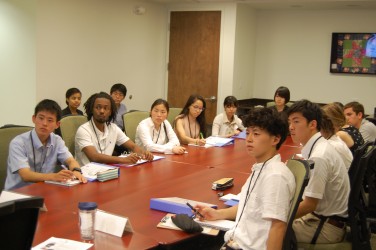 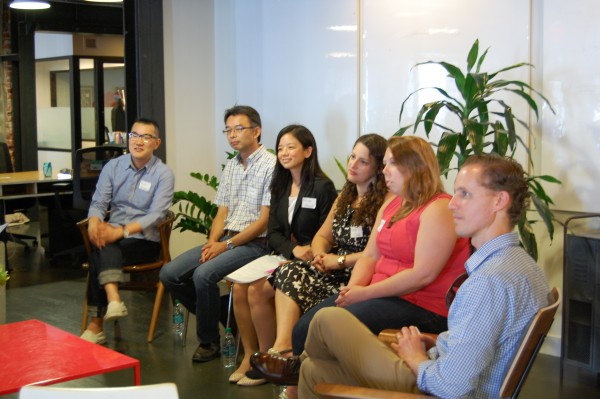 The students realized that there are many ways to be involved with international relations after meeting with many professionals in various fields, including a: diplomat, PR strategist, TV producer, corporate manager, local entrepreneur, and an astrophysicist at NASA.

While each panelist had a unique path and interests, they all shared how their international experience, whether study abroad or work abroad, influenced their career. They emphasized to the students the importance of seeking those experiences. They also encouraged the students to stay open minded, even to opportunities they never imagined, as it often leads to finding a new path of enjoyment that can also further your career.

Many students mentioned their enhanced interest in study abroad. Some Japanese students commented that they may change what they study in college, while another American student commented on her new interest in engaging in public service. 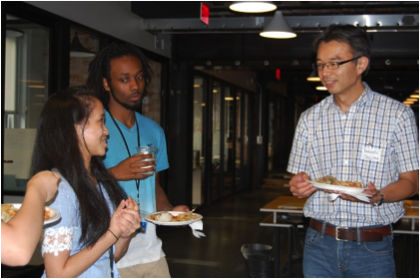 I used to think hard work always leads you to success. However, I realized the environment, including who you meet, are just as important. Studying abroad would make me jump into a completely new culture and therefore push me to grow. Especially if you hope to be ambitious, but are not sure which direction to go, changing the environment drastically could be effective. I will consider study abroad as one of my options in higher education now. – Taiki

I used to plan to study business in college, however my participation in the Summit made me want to study cross-cultural communication. I learned the importance of people-to-people relationships and I would like to get involved more directly. – Atsumi 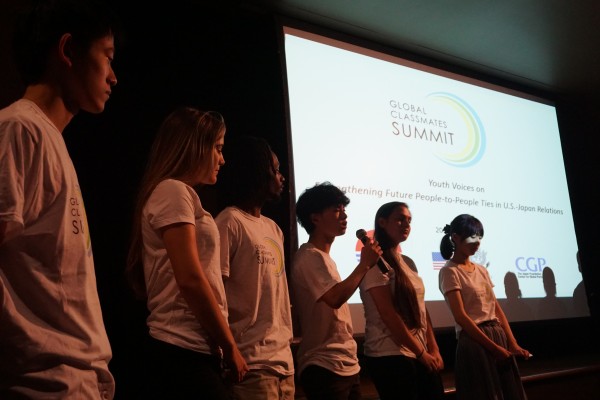 On August 3rd at the Japan Information and Culture Center, Embassy of Japan, the participants made a presentation in front of invited guests to share their Summit learning and proposals that tackle the theme, How can we strengthen future people-to-people ties in US-Japan relations?

While they did not have much time to prepare for the presentation, every student practiced hard to deliver a powerful presentation. Even though they were quite nervous for their big day, they did wonderful!

In their presentation, the students highlighted the importance of connecting people at a personal and emotional level. American students suggested exposing Americans to Japanese culture in early childhood through organizing cultural events at local elementary schools and public libraries. Japanese students pointed out that English often becomes a boring subject to memorize for many students in Japan and proposed that English learning should be tied to the objective of communicating with American students.

The audience enjoyed learning unique perspectives from the future generation of the two countries. Many guests commented that they were impressed by the students’ hard work that led to the excellent presentations. It was also inspiring and heart-warming for them to see the close friendships that the students forged in such a short amount of time.

For many students, the presentation became the culmination of their own experience during the Summit. It was the moment they realized that they had grown a great deal through the new perspectives they gained, and their improvements in language and public speaking. Furthermore, it was a testament to how close they had become with one another. 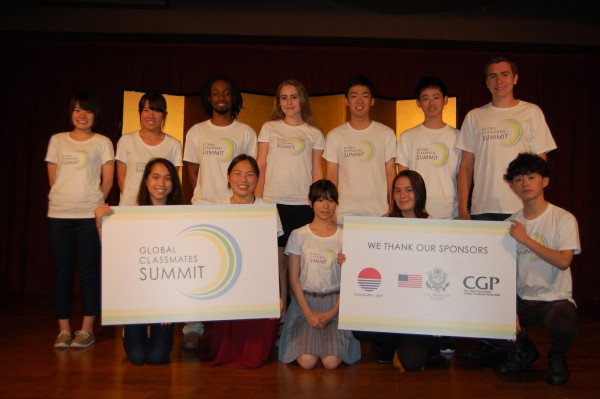 Until a week ago, we barely knew each other and were nervous to talk to each other. Now after the presentation, we give hugs to each other to celebrate our accomplishment and have fun taking photos together. This means that we can get close to anyone by meeting and conversing with them in person.  When I was asked by one of the guests whether I intend to present my experience at the Summit back at my high school, I thought “I definitely will”. However, before this I would not have liked such an opportunity that would make me stand out. It was the day I felt I had changed after interacting with American peers and learning from various people. – Ryo 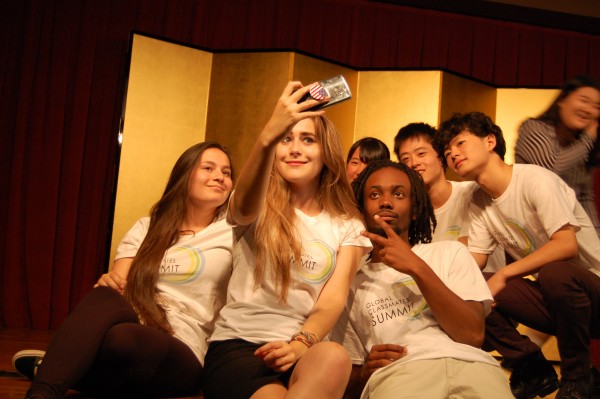 Today was the day of our Global Classmates presentation. Everyone truly did their best and the wave of feeling successful swept over at the end. Hours of hard work, mixed feelings and struggles brought the best out of us. I wished time would stop so we could enjoy our time together for longer. I will truly miss everyone from Global Classmates Summit. The friendships and bonds I share with them here will remain with me forever. Truly an experience I can never forget. – Pauline