Kizuna Across Cultures（KAC）facilitates the online language and cultural exchange program Global Classmates for high school students studying Japanese in the U.S. and English in Japan. Taking place in their everyday classroom, students become classmates with their peers abroad and engage with each other through the exchange of messages, photos and videos on a variety of topics, all without needing to travel. The 6-month exchange is an innovative educational program, in which the students develop friendships, deepen understanding of each other’s cultures, and naturally improve their language skills.

KAC is looking for schools that have a teacher who is passionate about offering such an experience to students, a reliable internet connection at school and students who are curious. We work with teachers to provide students with an opportunity they may otherwise not have had in hopes to inspire youth to look beyond their communities, embrace diversity, and become active global citizens.

Following the program application and selection process, accepted high schools in the U.S. and Japan are paired up with one another to engage in the 6-month, September to February, program. Facilitated by teachers, students in language classes, elective classes, or club activities such as Japanese Club and English Club participate in the program.

Using the educational e-classroom set up for each pair of schools, students engage with one another through student-focused discussion topics that allow them to get to know one another and learn from one another in a fun and casual environment. Topics range from everyday themes, such as “What’s your favorite food?” or “What music do you listen to?” to themes that make students think a bit more, such as “My future dreams” or “School rules.” Combined with their KAC Coordinator’s input on best practices, teachers select topics based on students’ interests. A new topic is posted for students to engage in every two weeks.

Following the teacher’s instructions, students first post their own comment on the topic, then read and respond to their partner and own classmates’ comments. Additionally, they also reply to students who responded to their comment, and so forth. Although the program is part of a class or club activity, students can log into the e-classroom from their smartphone, internet connected computer or tablet 24/7, so despite the time difference, it sometimes turns into a chat session!

Students from both countries write in English and Japanese so that they can not only practice communicating in the language that they are studying, but can also learn how a native speaker communicates. This is where students move beyond the textbook and learn real-life Japanese/English hands-on.

In Global Classmates, students not only exchange their thoughts and ideas via written text, but also via various types of visuals – photos, videos, emoji, etc. For example, in the Self-Introduction Topic done at the beginning of the program in September, words alone are not enough to fully express who each student is, so often they share photos of their families and pets while others share photos of their room.

Some teachers even have their students create video messages to introduce themselves to their new partner classmates. They often start off shy, with simple phrases such as, “Hello, my name is…”「はじめまして、わたしは・・・」, but they smile and giggle, and their effort shines through. At their age, it requires courage to speak to a native speaker of the language they are studying, but not having perfect grammar is the same for all of them, no matter what language they are studying, and this helps to bond them together. The students are encouraged by seeing their partner classmates work hard to communicate with them, and they begin to want to know more about one another and share more about themselves. This motivates them to communicate more and the students start to feel more comfortable and begin commenting within the discussion topics more naturally. Continuing to practice what they learned in the classroom in an actual live, fun conversation accelerates learning and understanding a foreign language. This leads to great synergy between the regular language class and Global Classmates.

Furthermore, students begin to gain something even greater than language education. They experience first-hand that despite coming from different cultures and having different opinions, there is still always common ground. While learning from their differences and exploring each other’s interests, they figure out ways to communicate and be understood so that they can build relationships with one another. And it is this skill that is crucial to becoming a global citizen in the 21st century – the ability to communicate and work together with people of different backgrounds to find common values that bond you, all while in an online environment.

In addition to the online discussions, students also participate in the following two projects to connect and engage on a deeper level. 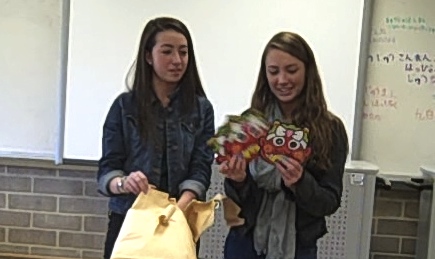 Omiyage Exchange is a project where each school collects or makes gifts of their choosing and then sends them to their partner classmates across the Pacific. Students send items such as snacks, magazines, cool school supplies, and other cultural knick-knacks. Often the most beloved omiyage are items that are not expensive but thoughtful, such as handmade pins and bracelets for each partner classmate, or a handwritten note for each item explaining what it is. The students then post “We received the omiyage!!” with photos and videos. The students not only enjoy receiving the omiyage, but also love to see the reaction of their partner classmates who received the gifts they sent. Students often comment with things such as, “Sachiko, I’m so excited to see that you got the omiyage I sent!!” or “It’s funny to see that the snack that is so popular here in Japan wasn’t a big hit there in the US lol” 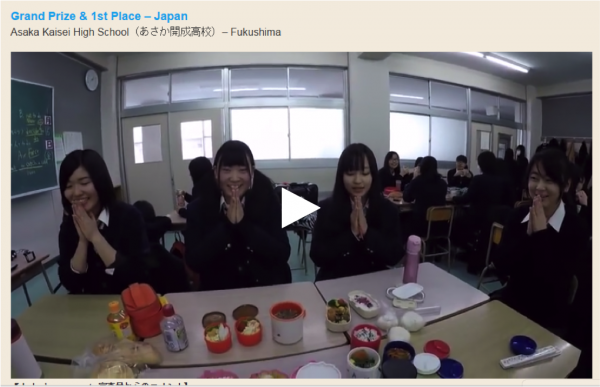 The 6-month long Global Classmates program culminates in Video Koshien, a program-wide competition where students create unique short videos that offer their distinctive perspectives on a central theme. Normally students only engage with their partner school during the program, but Video Koshien allows them to watch the videos of students from other schools and explore new approaches to presenting their ideas using video and sound, all while learning about an deepening their understanding of the diverse cultures of their classmates from Japan and the U.S. Participation is not mandatory; however, most schools take on the challenge every year!
Students in Japan create the video in English and students in the U.S. create the video in Japanese. If you are wondering, “but my students’ English/Japanese levels aren’t that high…” don’t worry. The videos are judged not so much on language ability, but rather on their overall quality of video, taking factors such as ability to express their ideas, structure, creativity, and presentation skills into consideration.